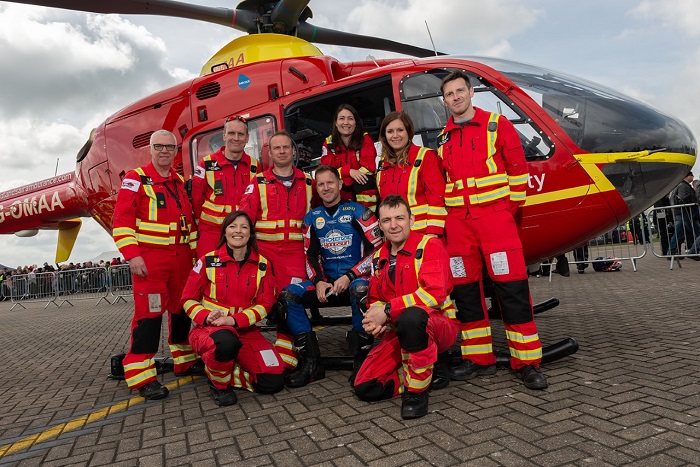 Following the postponement of Midlands Air Ambulance Charity’s Bike4Life Ride Out and Festival, the charity is taking the event virtual until a new date can be scheduled.

The event, which was due to celebrate its tenth anniversary, this year, usually attracts over 10,000 biking enthusiasts every year. Any biker or motorcycle fan in Staffordshire who wants to show their support to Midlands Air Ambulance Charity is being encouraged to take part in a virtual version of the Ride Out, which they can get involved with from the comfort of their own homes.

To take part, Midlands Air Ambulance Charity is asking motorcyclists to send an image of themselves with their beloved motorcycles, to: bike4life@midlandsairambulance.com. The pictures will then be used to create a ‘virtual ride out’ film which will go live via facebook.com/Bike4LifeFest and facebook.com/MidlandsAirAmbulance on the original event’s date, Sunday 26th April 2020.

It can be a photo you have already taken, as the charity is keen that people do not put themselves or others at risk but continue to follow all Government guidance. Only send images that have the person’s consent to be in the virtual Ride Out.

The charity also has a prize available and anyone who submits a photo will be in with the chance of winning. The prize consists of a ‘goodie bag’ including merchandise from the charity’s Bike4Life clothing range, signed books from travel writer and biking enthusiast, Zoë Cano and tickets for the next Motorcycle Live.

Emma Gray, fundraising and marketing director for Midlands Air Ambulance Charity, explains: “The postponement of Bike4Life and other events means a loss of £200,000 to the charity, which would have funded 34 air ambulance and over 700 critical care car missions.

“On average, we undertake a mission involving a motorcyclist every four days, and subsequently the support we receive for our lifesaving cause from the biking community is tremendous. We therefore felt we couldn’t let the postponed Bike4Life date pass without marking it in a special way.”

Find out more about Midlands Air Ambulance Charity at midlandsairambulance.com and follow the organisation on social media.

It's PAYDAY weekend! There are only two paydays until #Bike4Life 2023, and tickets are expected to sell out fast https://t.co/kdrqZVC3Eo

The snow and cold weather aren't the best conditions to ride your motorbike in. Tickets are ON SALE NOW for https://t.co/VOUVhLYu20

#Bike4Life2023 is back on Sunday 23rd April! Raise awareness for #BikerSafety while enjoying an action-packed https://t.co/TGW9rRkFXp